BATANGAS AS ONE OF OUR FAVORITE VACATION HUBS

Batangas is a renowned weekend destination known for its famous beaches and abundant ecosystems. It is easy to get there due to its proximity to the metropolis. The Taal Volcano and its lake are just two of the many scenic spots in this region. Other famous tourist spots are the Calaruega Church, Aquaria Water Park, San Juan and Laiya Beaches, Fantasy World, various farms, and the EZ Museum. And the good news is you can still stay connected during your getaway with access to fiber internet in Batangas.

Additionally, it is also known for its rich culture. It is called the “Cradle of Noble Heroes,” being the birthplace of national figures. To name a few, these include Apolinario Mabini, Claro M. Recto, Miguel Malvar, and Felipe Agoncillo. More so, it has a long and well-preserved history that dates back to the nineteenth century. Certainly, this is shown by the various surviving ancestral homes and businesses.

Furthermore, Batangas is a substantial producer of high-value agricultural products such as fruits, vegetables, poultry, cattle, hogs, fish, and coffee.

Batangas capitalized on its strategic location and proximity to Metro Manila. Specifically, it formulated a comprehensive infrastructure plan that prioritized new highways, bridges, and seaports.  Hence, such eagerness to leverage infrastructure drew both domestic and international investors.  Evidently, hundreds of manufacturing firms have sprouted, such as steel industries, petrochemical complexes, and special economic zones.

Further, the new international seaport serves as a primary port for inter-island shipping and the critical exit point for travellers going to Mindoro Island, Visayas, and Mindanao through the roll-on/roll-off (RORO) scheme. AlsO, its passenger traffic has outstripped that of Manila’s ports.

Now, Batangas stands out for its highly diverse economic profile due to these significant industrial changes. Thus, it has been dubbed as the next Metro Manila.

Absolutely, economic and population growth indicates the need to modernize digital infrastructure. The provincial government acknowledges these obstacles and facts, and works to change the internet environment to keep its competitive edge.

Consequently, local authorities quickly addressed this drawback.  They strived to digitize their areas, and the region in general, to avoid impeding its progress. With the new fiber internet in Batangas, connectivity is no longer a concern for both the industrial and residential sectors.

FIBER INTERNET IN BATANGAS IS THE PHILIPPINES’ NEWEST WAVE

Fiber internet in the Philippines just got better with the entry of another player in the telecommunications industry.  Streamtech is the country’s newest wave in fiber internet.

Streamtech can swiftly extend the bandwidth to multiple Gigabit connectivity especially in the international routes. Indeed, this is a fact, through its strong peering relationships with Tier 1 global internet upstream providers.  More so, localized content and peering strengthen its the network even more.

Furthermore, it has formed a direct relationship with one of the world’s leading telecommunications equipment manufacturers. Essentially, the latter acts as its network equipment and fiber-to-the-home connectivity technology affiliate. Together, they work to provide reliable internet service.

As one of Streamtech’s major service areas, Batangas is one of the first to benefit from these new technological advancements. This metro region, which is undergoing significant changes due to its continued economic and population growth, does not have to be concerned about digitization. As Streamtech provides fiber internet in Batangas, it guarantees its service areas unrestricted and limitless internet access. In turn, this aids in the region’s economic development.

Also, Streamtech offers various flexible plans and high-quality products that will forge your home connectivity ahead.  In fact, some municipalities are already reaping the benefits of increased convenience in their communities. These include Alitagtag, Batangas City, Cuenca, Ibaan, Lipa, Nasugbu, Lian, Rosario, Sto. Tomas, Talisay, Lipa, and Taal.  With a strong ally in their midst, entrepreneurs can now do business with ease. On the other hand, residents can expect unrestricted internet access.

GOOD NEWS FOR THE BATANGUENOS!

Indeed, the “better” choice just got a whole lot better because Streamtech has special deals for you.

You read it right! New subscribers who will get connected until June 2021 can enjoy a three-month free internet subscription (terms and conditions apply).  Essentially, you will save a considerable amount of money. That’s awesome. 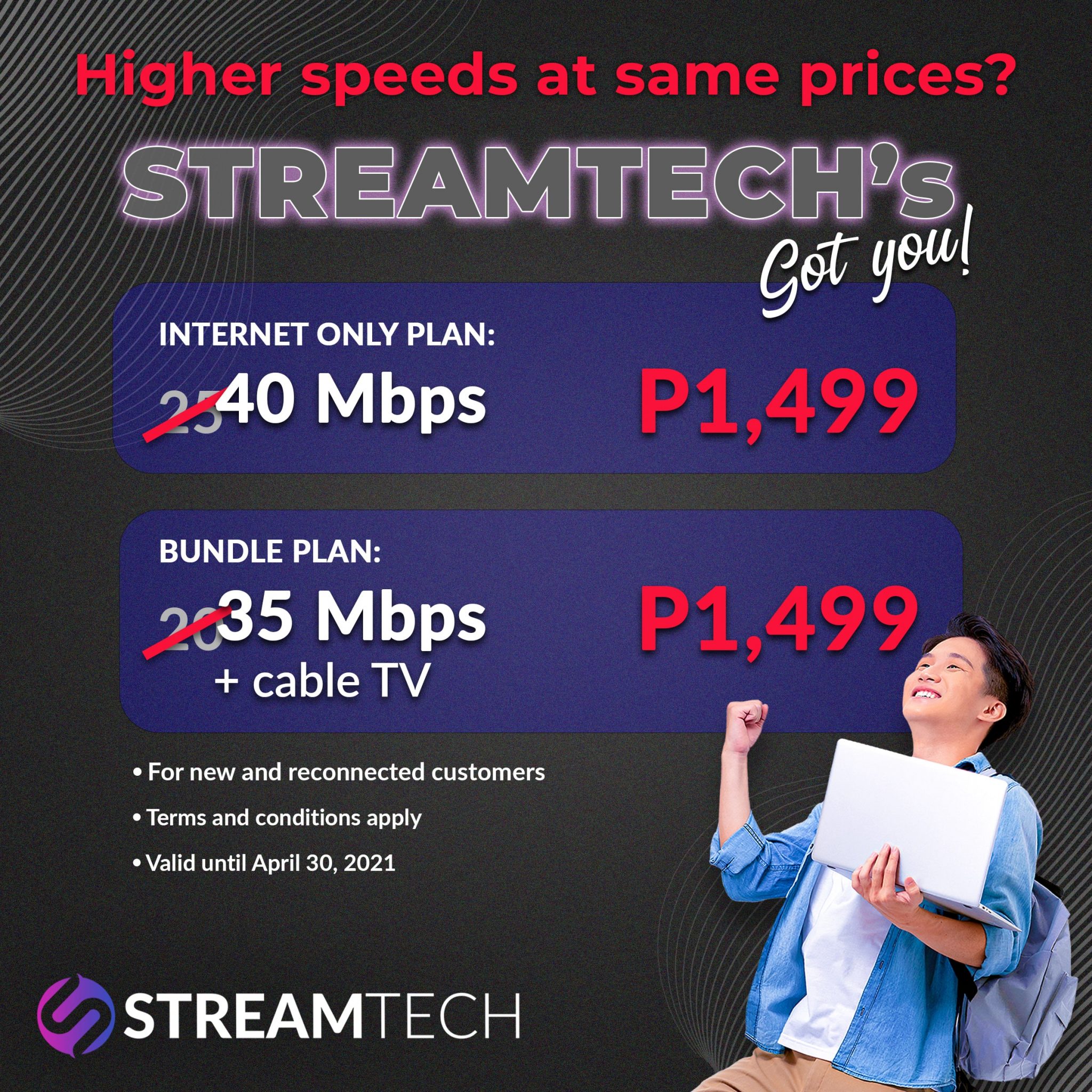 Not only the abovementioned, Streamtech is offering speed upgrades on selected plans.  You get a higher speed at the same cost of a regular plan.  That’s 40 Mbps for only PhP 1,499/month, superseding all currently available subscription plans. Additionally, you also get up to 35 Mbps (previously at 25 Mbps) plus a cable TV bundle for PhP 1,499/month.  Consider how efficient you’ll be if you have this much speed. Also, reconnected customers can avail of this promo.

So, what are you waiting for? These exclusive offers are available only for a limited time. Terms and conditions apply. See posters for details.

But even without these special deals, you can rest assured of its outstanding service.  Streamtech may not have been the first. But it is committed to leaving a legacy by becoming the highest speed and most secure internet provider in the Philippines. Currently, it has ongoing efforts to improve its facilities, to ensure the provision of first-rate services to its customers. In the days ahead, there will be many positive things in store for you. You will get nothing but the best products and services.

Signing up is as swift as its internet speed. Here are some ways to apply for a service connection. Social media savvy people can check the Facebook Pages of Streamtech branches below to keep abreast of their latest promo and updates. You can send service message requests to:

Another option is to log-on to their website to see all their products and services. Also, a chat support agent is available to assist you with your concerns.

Further, they have physical stores to accommodate your service requests.

Consequently, you can still enjoy being connected while luxuriating in the magnificent beaches and views of Batangas, one of our favorite getaway havens.