On April 14, Ana Patricia Non, a 26-year-old entrepreneur decided to set up a bamboo kariton along Maginhawa street that contained essential goods such as fresh vegetables, canned goods, vitamins, and the like. Above the cart was a handwritten signage that said, “Maginhawa Community Pantry. Take what you need. Give what you can.” This humble initiative amidst the still ongoing pandemic caught the attention of netizens throughout the country. And it has since then sparked a trailblazing movement across the nation.

How the Community Pantry Started 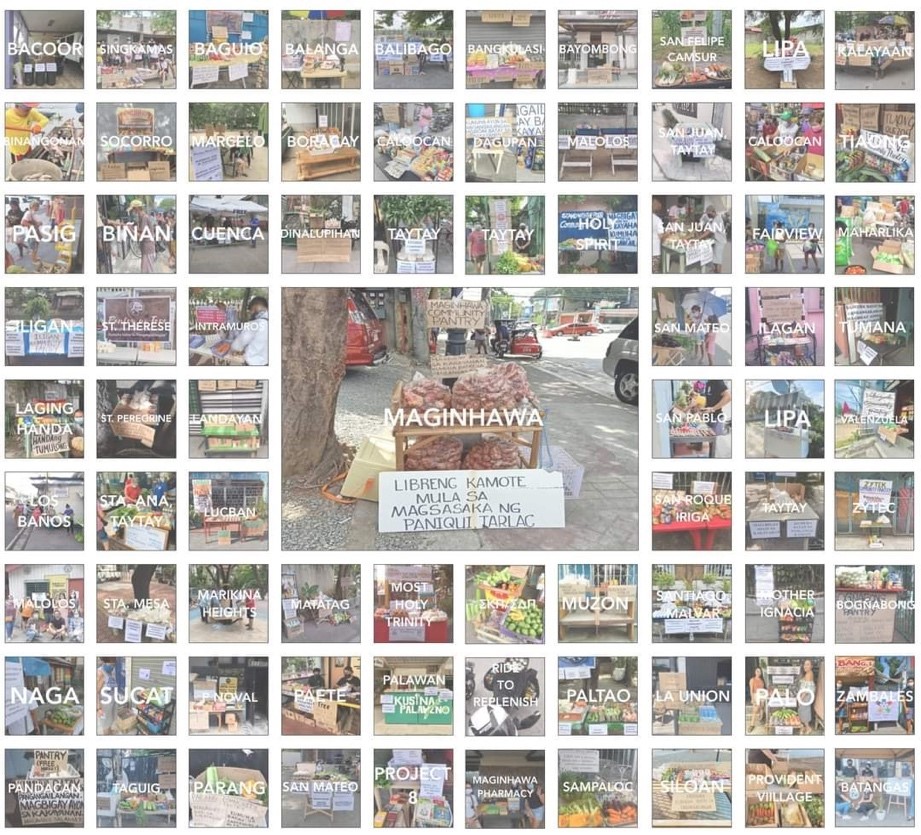 According to Non during her interview with CNN Philippines’ The Source, her area in Quezon City was put under lockdown even before the announcement of the Enhanced Community Quarantine (ECQ) in Metro Manila. Her small business was affected by the lockdown, and it left her with having only enough for her expenses.

However, her personal hardships didn’t stop her from thinking about the welfare of others. “After ng lockdown, sinet up ko ang community pantry bilang pantawid gutom sa mga Pilipinong ganito ang nararanasan (After the lockdown, I decided to set up the community pantry to help ease the hunger of Filipinos going through difficult times),” Non shared.

Inspired by her selfless gesture, other Filipinos followed suit, setting up their own community pantries in their areas. Non said that the replication of her efforts was a testament to how poverty and hunger amid the pandemic in the country is not an ‘isolated case.’ It also demonstrated how people are still willing to help each other out amid these trying times.

That a lot of other people followed Non’s example just goes to show how Filipinos are innately kind. The core value of bayanihan is prevalent to this day despite all the challenges brought upon by the ongoing pandemic. It demonstrates the best of humanity, how a lot of people not only think about themselves, but the welfare of their fellow men. They may not have a lot of resources at their disposal, but they’re still willing to help those who have less.

On the other hand, the community pantry movement also shows the integrity of so many Filipinos, how despite their personal struggles, they have in them the self-control to take only what they need in order for others to get to benefit from the community pantry as well. To give you a peek of the modern bayanihan being demonstrated all over the country, here are some amazing examples of community pantries that have helped so many in need:

Down South of the Metro 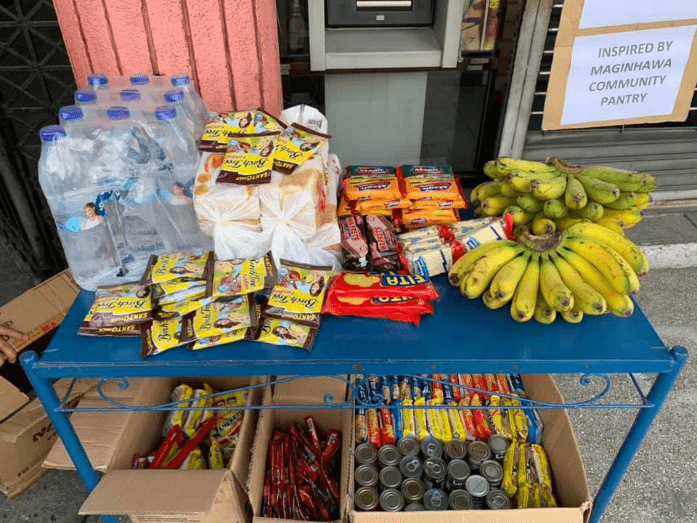 Ever since the Maginhawa Community Pantry went viral, many people from Metro Manila followed suit. In fact, there are even several pantries located in Muntinlupa City. An example of which is the one located in the barangay of Putatan. Organized by the Muntinlupa Food Drive, a charity organization which was established in the midst of the pandemic, the pantry has been steadily growing, receiving donations not only from kind-hearted citizens but various groups and companies.

Another example is the one located in Pilar Village, Las Piñas City, which was spearheaded by the local church group Lighthouse Christian Community. The organization partnered with entrepreneurs within the area in order to distribute essential goods to those in need. The church also said that the site in Pilar Village is only the first of the community pantries it plans to put up. This is a demonstration of how people are willing to help as many people as they can.

Community pantries have been organized not only by various groups, but also individuals who have the heart to help others. One particular resident in Taguig City even set up a pantry in front of their house. This proves that there are people who, despite their personal battles, think of other people’s welfare as well. It’s a touching example of how the ongoing pandemic has not stopped some people from demonstrating that there is still good in the world.

All the Way to Ilocos 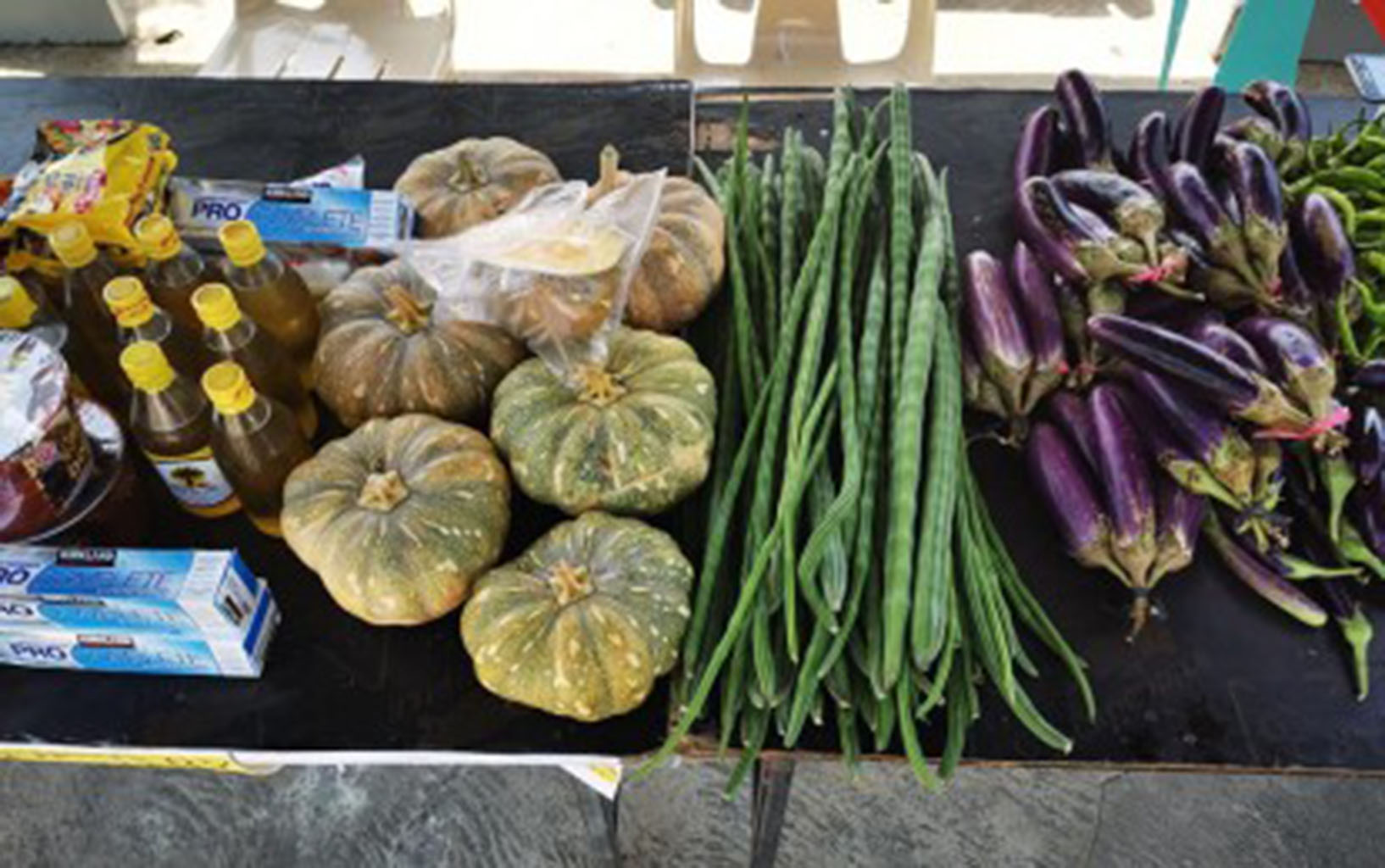 The community pantry movement goes beyond Metro Manila. Because of social media as well as traditional media, the initiative has spread all over the country. A testament to how far the community pantry movement has gone since that fateful day of April 14 is the one in Ilocos Norte. According to Maharlika.tv, a village in Bacarra town set up its own community pantry to help others make ends meet. Mayor Fritzie Ann Kaye Gapasin admitted that Bacarra was tremendously affected by a series of communal lockdowns, and urged others to revive the solidarity spirit.

In addition to the community pantry in Bacarra, other areas of Ilocos Norte such as San Nicolas and Laoag have their own community pantries. Some anonymous donors even delivered egg trays, grocery items, and packs of rice to households on strict lockdown.

In the Center of Luzon 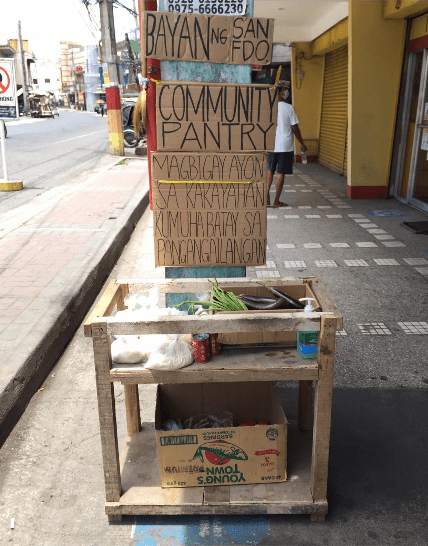 Not to be left behind, nearly 20 community pantries have been set up in Central Luzon according to Rappler.com. The organizer of the community pantry located in San Fernando, Pampanga (photo above) even posted a shout out to Non on Facebook for spearheading this bayanihan initiative. This shows how Filipinos know how to give credit to where it’s due, and that a simple act of one individual can spark an amazing movement that showcases the best of humanity.

Proof to Filipinos’ resourcefulness and creativity, a group based in Malolos, Bulacan called Kenyos Rolling Community Pantry took the concept to the next level by coming up with a rolling community pantry in order for them to donate essential goods to different barangays in their area. This goes to show that Filipinos are always thinking of ways to make a difference in more people’s lives. After all, everyone has been affected by the pandemic to a certain extent, but a lot of poorer Filipinos have been experiencing immense difficulty trying to make ends meet.

Bayanihan on in CALABARZON 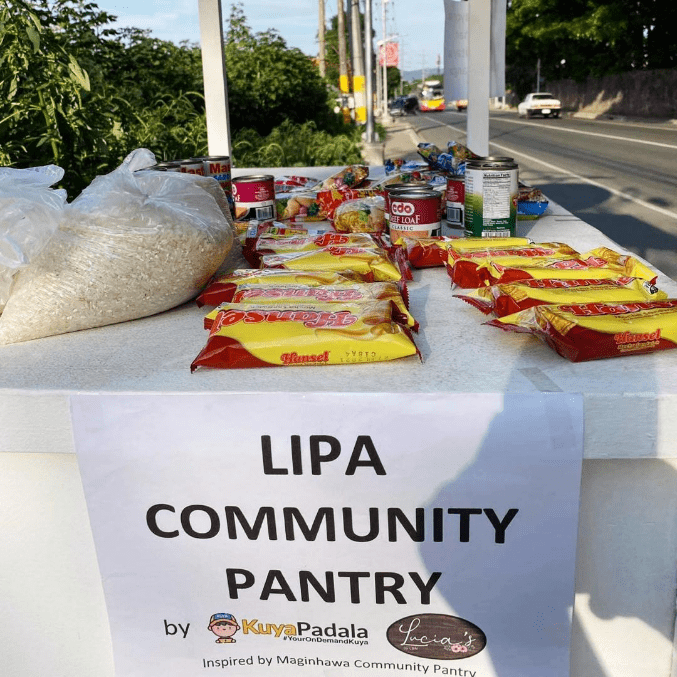 Filipinos all over CALABARZON also let their spirit of bayanihan shine through various community pantries put up all over the region. Small businesses from Lipa, Batangas even teamed up to set up a community pantry for those who reside within their vicinity. This goes to show that despite their financial struggles, Filipino entrepreneurs still have it in them the heart to give to the less fortunate.

Aside from small businesses, religious organizations such as a church based in Dasmariñas, Cavite, helped assist their communities in organizing community pantries. A lot of churches’ operations have been affected because of the lack of donations from their constituents who haven’t been able to go to church physically. However, they still pooled in their resources to be of service to others as a testament to their commitment to be a blessing to other people.

A humbling proof that even those who don’t have a lot are willing to give to those in need, one community pantry in Tayabas, Quezon admitted that their organizers didn’t have a table to place their goods in at the beginning of their initiative. They shared that they had used a folding bed, but have recently upgraded to an actual table. While this may sound comical to some, it was a total eye-opener that not everyone has access to the little things such as a spare table big enough to place people’s donations in.

Free for All in Bicol 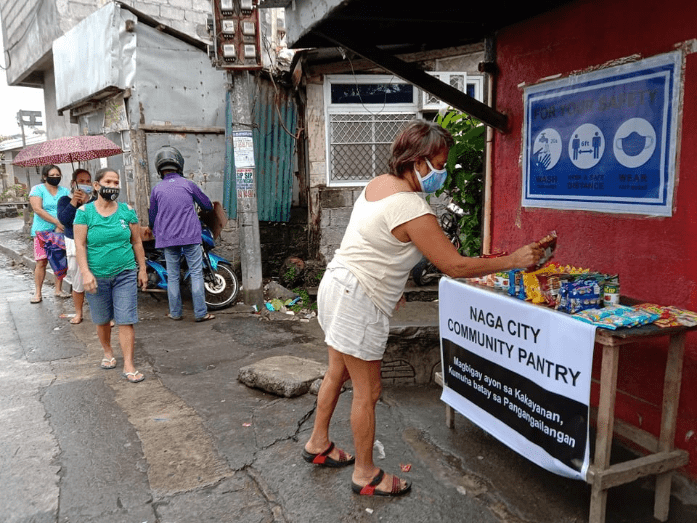 Meanwhile, several pantries in Naga City, like the one in Doña Clara (photo above), even had their own printed tarpaulins. Aside from the actual community pantry signage, they even had a tarpaulin with minimum health requirement guidelines. This goes to show how important it is for them to take the opportunity to educate others on how to safeguard their safety as well as that of others.

Another touching example is the one in Iguldad, Naga City. Proof that children are the future, kind-hearted young people organized a community pantry in their vicinity. They even shared how residents from their area were surprised that they had one. They only found out about the initiative through the radio, television and in social media. This example shows how powerful different forms of media can be in disseminating information, and that includes the locations of community pantries. 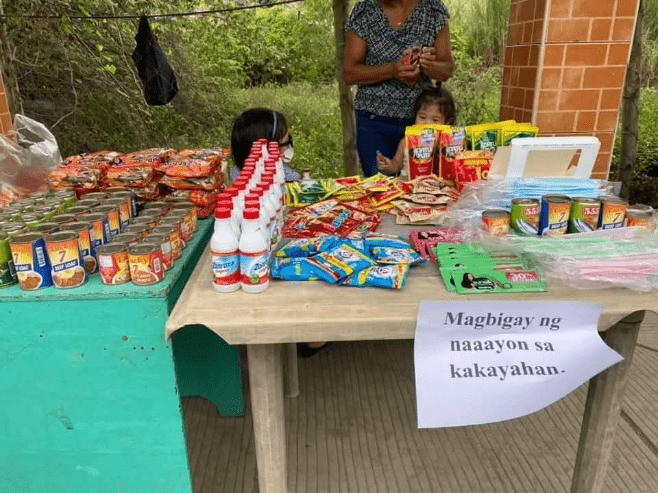 The community pantry movement isn’t exclusive to Luzon only. Many Visayans started their own initiative to help out their neighbors as well. An example of which is the one located in Pavia, Iloilo, which had so many free items that it reassembled a mini sari-sari store. Aside from canned goods and instant noodles, they also offered free toiletries and cleaning agents. It was proof that a lot of people understand that basic needs go beyond the food people consume on a daily basis. A lot of people also need other essentials for their day-to-day needs.

Another heartwarming community pantry is the one located in Jordan, Guimaras. Organized by several youth groups, it goes to show that the youth have the heart to be of service to those in need. It was proof that amazing things can happen when people set aside their differences, and work together. It’s also a testament of how the future will be in good hands in those who put others above themselves.

Beyond the Community Pantry

Aside from the fact that these community pantries were spearheaded by kind-hearted Filipinos, what the areas above have in common is that they are all serviceable areas of Streamtech. It is one of the newest internet service providers in the country, Streamtech empowers Filipinos with affordable, unlimited high speed fiber internet connection.

The internet has played a big role in spreading information about community pantries all over the country. It has also helped existing community pantries get more sponsors and donors to contribute to their cause. With Streamtech’s fast internet connection, more Filipinos can learn more about this amazing movement as well as keep themselves up to speed with the latest news around the world.

Apart from providing one of the fastest internet connection in the Philippines, Streamtech also offers cable TV services through its partnership with Planet Cable. This means Filipinos can not only connect with others in the comforts of their homes through social media, but also watch their favorite television shows and movies through the power of Streamtech.

What’s fantastic about Streamtech is that it offers economic packages alongside super fast internet speeds. This grants more Filipinos the power to choose an internet service provider that won’t break the bank. Given the financial challenges the ongoing pandemic has posed on a lot of Filipinos, having a budget-friendly internet provider can really help people stretch their budget, and manage their expenses better. This also means they’ll also have more budget to donate or even set up a community pantry within their own area. The possibilities are simply endless, and the costs are within everyone’s reach with Streamtech.

To know more about Streamtech, its products and services, you can visit its website, Official Facebook Page or LinkedIn Page. You can also call their customer service hotline numbers:  (02) 8808-2323 or 0919-057-8888.