Beyond Guimaras Mango: What is the Economy of Guimaras? 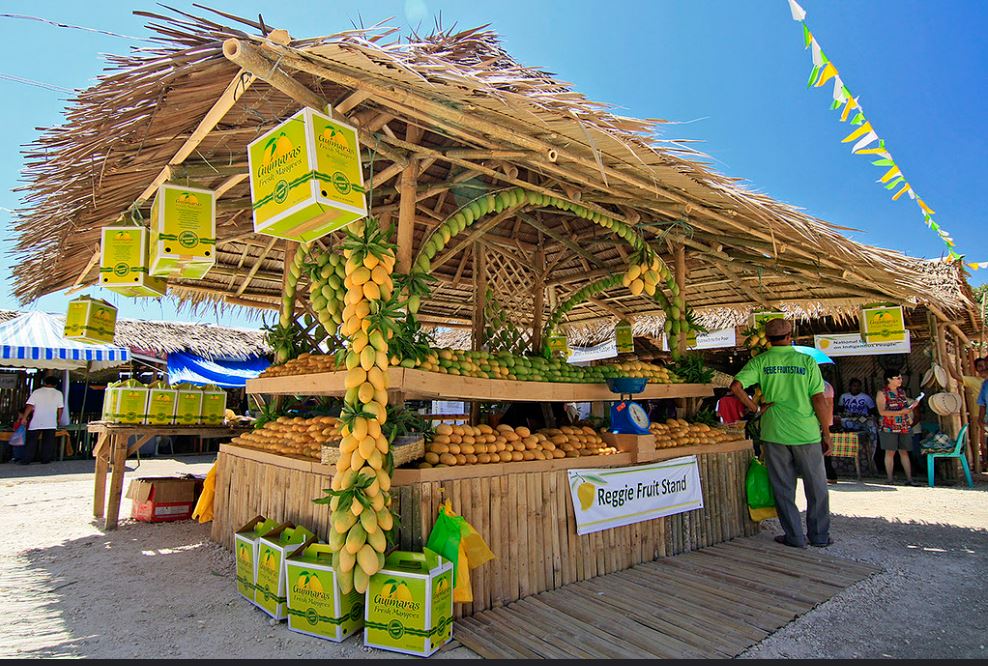 As one of the country’s smallest provinces, Guimaras is located southeast of Panay Island in Western Visayas. Five municipalities and ninety eight barangays comprised the island. Its northwest border is Iloilo City while Negros Occidental to the southeast. The municipality of Jordan serves as the capital of the province.

Guimaras is famous for its sweet mango. The fruit from this island province is popular all over the world due to its distinctive flavor.  As Guimaras mangoes are products for export to different countries, the mango industry has made a substantial contribution to the economy of the province. But there is more to Guimaras than its sweetest mangoes.

There are other interesting facts to learn about this island province. The following are some fascinating facts about Guimaras:

1. How Guimaras got its name

According to historical documents, Guimaras’ previous name was “Himal-us.” Such came from the term “paghimud-us,” which means “struggle for survival.” The name Himal-us later became Guimaras during the early years of the Spanish colonial period.

Some Spanish historians said that name of Guimaras may have been after the Guimaraes peninsula in Portugal, or names of locations in Spain such as Guimaron in the provinces of Leon and Galerea, Gimenia in Catalonia, Gomera in the Canary Islands, and Guimaraon in another region.

But an Ilonggo legend revealed that such name came from Princess Guima’s ill-fated love with slave Aras, who deserted their tribe to enkindle their forbidden love. The princess was able to escape her betrothal to another noble son by riding a tiny raft. Unfortunately, they vanished in the storming waves, and never seen again. And people began to hear the regretful father’s shouting of the lover’s names “Guim-Aras” repeated in the wind during stormy seas, giving rise to the name Guimaras.

2. Guimaras was once part of Iloilo

Guimaras was a sub-province of Iloilo until it became an independent province on May 22, 1992. Its proclamation as a regular and full-fledged province after a plebiscite was for the ratification of the approval of its conversion pursuant to Republic Act 7160.

The oldest of the five municipalities, Buenavista, is the hub for higher education, as well as a secondary growth center and alternate entrance to Guimaras. The enormous flora life of Buenavista is undeniably appealing to both local and international nature lovers. Residents here earn money through mango plantations, forest trees, and ornamentals.

Apart from mango, tourism, cashew cultivation, and food processing are the industries with the most potential for contributing to Guimaras’ economic growth. Fishery, which includes seaweed farming, is another thriving industry in the island province.

The most significant local factors that have accelerated the growth potentials of the selected industries include key infrastructure and other support facilities, capacity enhancement efforts, more favorable regulations, and higher investments.

Guimaras is the leading producer of mangoes because almost half of all exported mangoes come from this island. Dubbed as the country’s “Mango Capital,” the quality of Guimaras mangoes is primarily due to the land’s soil, which has the ideal composition for growing fruits.

If you’re into buying seasonal stuff, then this will be perfect for your list. Aside from mangoes, they also produce other fruits and vegetables such as bananas, tomatoes, and eggplants among others.

In Guimaras, there was a highlight of tourism as a strong performing sector with great potential for contributing to local economic growth.

It has a competitive edge and development potential owing to its many tourist attractions and potentials, which include beach resorts, islets, community-based festivals, religious sites and activities, natural, historical, and agricultural and farm sites.

Tourism has contributed significantly to the island’s economic activities as well as the generation of job opportunities. The presence of resorts, hotels, pension inns, tourism-related producers, land transportation and pump boat operators, and tour guides, tour attendants, and tour helpers has helped boost the industry, as based on data of the local government.

Guimaras is also a haven of tourist attractions that have enthralled local and foreign tourists. Here are some:

The summer residence of the Lopez Clan, situated atop a hill and known as Roca Encantada or “Enchanted Rock,” is one of Guimaras’ most famous monuments. The construction of the home, which is in Buenavista, was in 1910. Despite its contemporary appearance, the beautiful home has a designation of a “historical house” by the National Heritage Institute.

The magnificent balconies of Roca Encantada provide a breathtaking view of the beachfront and Iloilo Strait, with “La Islas de Siete Picados” just off the shore.

The Navalas Church, erected between 1880 and 1885, is Guimaras Island’s oldest Catholic church. This tourist destination used to feature a four-foot-tall bell, but it was stolen and dropped into the water near Siete Pecados, according to a legend. The interior and other sections of the church have been modernized, but the ancient coral stone front and stone fence have remained unchanged.

Guimaras is home to one of the world’s smallest plazas. It was also the previous holder of the same title in the Guinness Book of World Records. It’s a 15- to 20-minute motorcycle ride from Guimaras’ harbor. The plaza, which is around 200 to 300 square meters in size, with a statue of Philippine national hero Dr. Jose Rizal in the center, is located adjacent to the highway and residential areas in Poblacion, Jordan.

The Trappist Monastery grounds in Guimaras are a tranquil and spiritual enclave managed by the Cistercian Order of the Strict Observance monks. These monks follow the rule of St. Benedict is notable for his severe austerity and strictness.

The monks support themselves by selling souvenirs and processed goods including jellies, jams, sweets, and other delicacies in a tiny shop inside the premises of the monastery. The ingredients for all of the items are from the cultivation of the Trappist grounds.

The Taklong Island National Marine Reserve is located near Nueva Valencia. With 46 islands and islets and 963.45 hectares of marine waters, it covers a total area of 1,143.45 hectares. It is home to a variety of flora and fauna, including corals and seagrasses.

It is a protected marine area in Guimaras that is under the manegement of the University of the Philippines Visayas in Iloilo. The extensive mangroves, hidden coves, white-sand beaches, and sandbars are all for exploration. A lighthouse on a hill will provide a stunning perspective of the entire island as well as the huge ocean.

The 27 windmills built in San Lorenzo are another tourist attraction in Guimaras that you should see. These windmills, like the ones in Bangui, Ilocos Norte, draw visitors to the island. Strewn windmills are over the landscape, providing travelers with beautiful views.

The SEAFDEC Aquaculture Department’s Igang Marine Station (IMS) is located on the southwest coast of Guimaras Island. Four islets made up the station, connected by floating footbridges and clusters of floating fish cages.

This is an excellent location for children and adults to see and learn about the marine reserve. This is where various researches are done and different aquatic life forms such as gigantic clams, sea horses, turtles, and other tiny and big fishes are cultivated.

Balaan Bukid is a landmark in Guimaras island. It is famous for being a Catholic pilgrimage place, particularly during Holy Week. Along the way to the summit, there are 14 stations known as the “Way of the Cross,” which portray key events in Jesus Christ’s life. Catholics come to Balaan Bukid to be reminded of Jesus’ suffering in order to save humanity.

Some people who have visited this landmark said that walking the trail leading to the top is quite calming to the spirit, especially after you reach the peak. At the summit, there is a church and a massive crucifix, as well as a breathtaking panoramic view of the Iloilo Strait.

Another well-known tourist attraction in Guimaras is the Guisi Lighthouse, which is located near Guisi Beach. It is the country’s second oldest lighthouse, dating from the 18th century and serving as a navigational aid for mariners navigating the Guimaras Strait. The ruins of the wrecked structures in the region may be seen on the approach to the lighthouse.

Despite the fact that there is a notice indicating it is not safe to climb, the most daring do so. A cautious journey up a spiral staircase would take you to the top of the lighthouse, where you’d be treated to breathtaking views.

Turtle Island is one of Guimaras’ most beautiful islands, and it should be included in any island hopping tour if you plan it in Alubihod Beach. The name comes from the fact that it is a well-known sea turtle refuge. It also boasts a beautiful beach with crystal blue sea. It is an inhabited island where the caretaker/s will approach you for registration as you dock, and a modest charge will be collected for the island’s upkeep.

This tiny island near Turtle Island is another popular tourist attraction in Guimaras. It is an uninhabited island that boasts a beautiful white sand beach with enticing crystal blue seas ideal for swimming and snorkeling. When snorkeling, schools of fish can be seen.

Guimaras is also noted for its white-sand beaches, clear waters, and quiet off-the-beaten-path islands. Alubihod Bay, with its tranquil seas, and Guisi Beach, where tourists may experience the province’s natural beauty, are two of its most popular attractions.

Going on a tour of the islands is a fun activity that is frequently the highlight of a day trip to the island. A number of boat operators line the shore, offering boating services at standard rates. These boatmen have an island-hopping itinerary, but they may also fulfill requests that are not on the route.

The flagship cultural event of the province is the Manggahan Festival. The event is a celebration of the abundance of this tropical fruit, which has provided the province much good luck year after year. The event is also being dubbed the “sweetest fiesta” in the country by the local government.

Every May, the province hosts the Manggahan Festival, which lasts two weeks. Mangoes are in season during this time of year when they are ready to be picked. For the genuine fruit aficionado, there’s the “Mango Eat All You Can,” which is an interesting feature of the festival. For a fee, participants can enter an area brimming with this fruit and eat as many mangoes as they can.

If you are a foodie, you enjoy pizza, and you happen to be in Guimaras, you should try this mango pizza from The Pitstop Restaurant in San Miguel, Jordan. The pizza is topped with cashew nuts, also a well-known Guimaras product, together with cheese and bell pepper.

Great news! Streamtech, one of the Philippines’ newest telco, now offers fast, reliable, and unlimited fiber internet services in the island province of Guimaras. Serviceable areas include the municipalities of Jordan, Buenavista, and Nueva Valencia.

We believe that Guimarasnons deserve unlimited internet plans that are reasonable and avail of additional high-quality items and services.

You can also avail of the Extendifi WiFi Extender that allows you to enjoy the power of Streamtech’s connection no matter where you are.

PrevPreviousWhy Nueva Ecija is the Rice Granary of the Philippines
NextWhat is the economy of Quezon Province now?Next