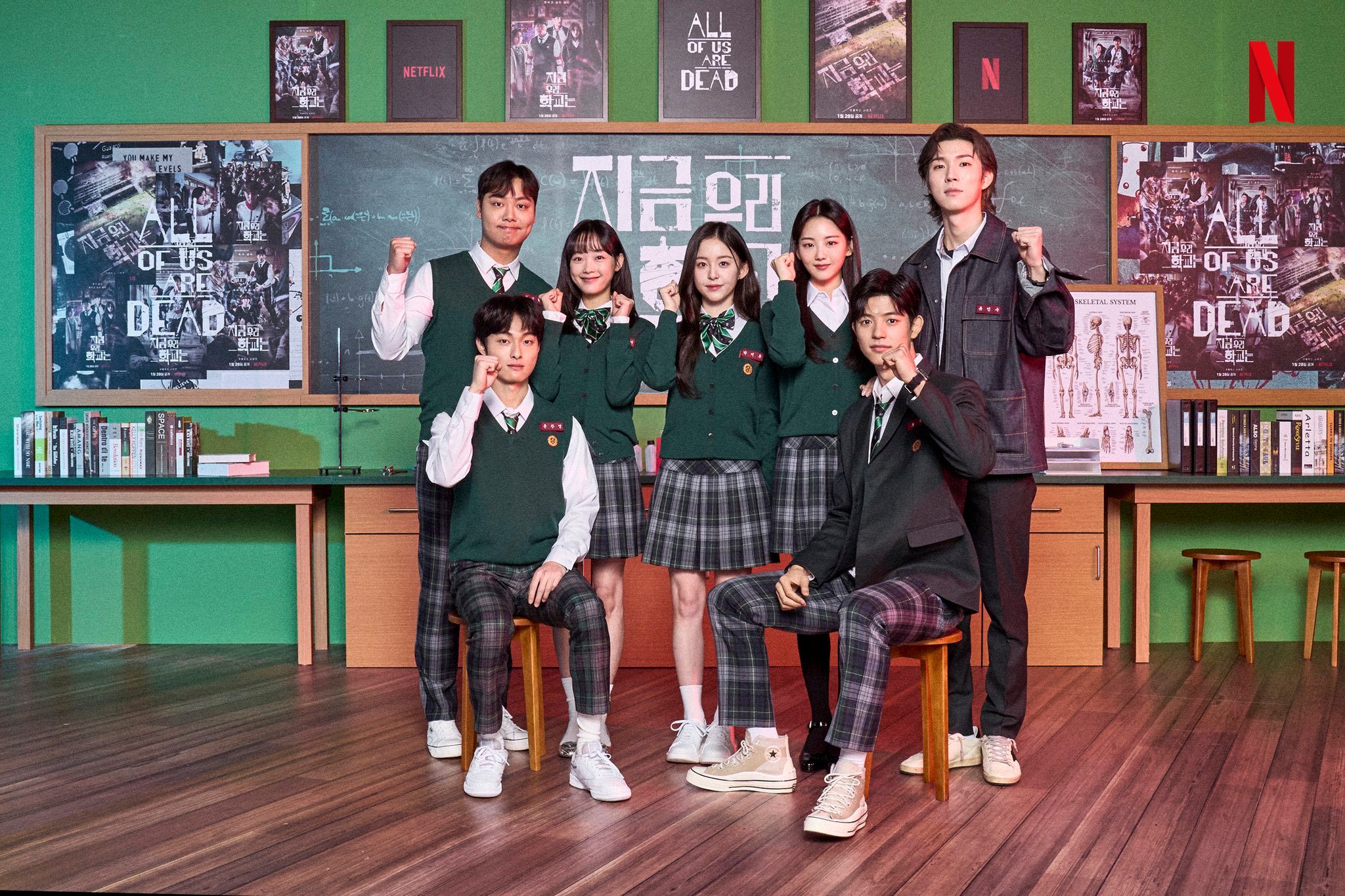 Shortly after Netflix’s massive survival thriller series Squid Game hit the content streaming platform, another Korean drama generated buzz on the web. Way back in late 2021, plenty of people have already been talking about the next big Korean series on Netflix. That show is All Of Us Are Dead.

You have probably seen countless memes and discussions on the show if you’ve been online lately. What is the fuss about, anyway? This article will delve into what the show is all about. It will also detail why this Korean drama is worth your time. After reading this, you’ll want to stream the series with your fiber home internet connection.

We also have some related articles you might want to check out:

The Backstory behind ‘All of Us Are Dead’

In 2017, Netflix announced that it would dedicate nearly 2 billion dollars to foreign-language content. This commitment paved the way for Netflix subscribers worldwide to enjoy movies and television series made my creatives outside Hollywood. While a vast number of Foreign content get snubbed on the platform, Netflix releases worldwide sensations that become loved by many once in a while.

In recent years, Korean dramas have been becoming more popular worldwide. Shows like Goblin and Doctor Stranger are at par with Hollywood hits in terms of fame. Hence, it is no surprise that Netflix has invested in Korean content.

As a result, Netflix has produced several Korean dramas, such as Squid Game and Kingdom. In 2020, Netflix announced it had secured the rights to a new Korean zombie virus outbreak series.

All Of Us Are Dead is based on Joo Dong Geun’s famous Korean webtoon Now At Our School. The story centers around a group of kids who bravely fight their way out of their school grounds. Veteran directors Lee Jae-kyoo and Kim Nam-Su helm the project, which is why people expected great things from the show. Chun Sung-il was entrusted with the script.

This Korean drama was released worldwide on January 28, 2022. It has twelve episodes, about one hour each. Compared to other Korean dramas, the show is relatively long. Given its many twists and turns, the time spent will be worth it.

All of us are dead: the start

One factor that makes All of Us Are Dead unique is how it starts the show. Most zombie virus outbreak movies and shows center on a zombie bite or infection. This show begins with a rainy brawl among high school students on a rooftop of an unknown building. Shockingly, one of the students involved in the fight fell off the building.

Most people would assume this would cause his death. However, the audience soon finds out that the victim’s father conducted a dangerous experiment to make sure he could fight back his bullies.

Shortly after, it was revealed that the victim’s father, Lee Byeong-chan, is also a science teacher in Hyosan High School. A student unwittingly got bitten by a science experiment and got infected with what the teacher calls the Jonas virus.

After failing to contain the student’s infection, a fast-spreading outbreak occurred within the school and across Hyosan City. A seemingly harmless bite turned into a deadly journey for survival. Select trapped students soon find themselves fighting for their lives to reach the quarantine camp located outside the city.

Who are the characters?

As the show’s trailer and marketing collaterals suggest, most of the series focuses on the events in Hyosan High School. Here are some of the leads of the show:

Nam On Jo leads a big group of students who initially survive the sudden zombie outbreak. On Jo is a junior student and Cheong-san’s neighbor and childhood friend. Because her father works in rescue services, she knows survival skills. This proved helpful when the group battled a hoard of zombies in the music room.

She was also the voice of reason when some of her friends became stressed out because of their dire situation. She is played by Park Ji-hu of House of Hummingbird fame.

Lee Cheong San is a kind-hearted and brave Junior student. Despite his worries, Cheong San always the welfare of others before himself. His selfless nature was detrimental to his group’s journey throughout the show.

While he assumed a leadership role right off the bad, Cheong San also encountered personal battles along the way. He had to face school bully Yoon Gwi-Nam while helping out his friends as much as he could. He has long been infatuated with his childhood friend, On Jo. Cheong San is played by Yoon Chan-Young.

Choi Nam-Ra is a junior class president known for her cold attitude. While she may seem aloof, her intellect and close attention to detail played a huge role in the students’ misadventures.

During their group shares confessions, she opened up that she didn’t have any friends. Their risky journey paved the way for her to make new friends. She even found that some people are interested in knowing her better. Cho Yi-Hyun plays this complex role.

Also known as Bare-Su, Lee Su-Hyeok is a tall and handsome student known for his martial arts skills. He hung out with his school’s bullies before, but he turned a new leaf before the show started. Ridden by his past guilt, Bare-Su takes plenty of risks to protect his schoolmates.

Bare-Su is one of the student group’s unofficial leaders and protectors, remaining level-headed throughout the show. He always had a crush on Nam-Ra while urging Cheong-San to make a move on his secret love. Park Solomon of Sweet Revenge fame plays this character.

Gwi Nam is one of the show’s main villains. At first, he seemed afraid of the consequences of his actions. However, incidents throughout the show, such as his encounter with the principal, changed him completely.

Byeong Chan is another important character in the show. He is the genius behind the Jonas virus that devastates Hyosan High School and the rest of the city. Long after his death, Byeong Chan’s video logs gave the audience a peek at how severe the virus is.

Byeong Chan passes in the middle of the series. However, his impact on All of Us Are Dead proves significant until the show’s end. His video logs provided critical information that resulted in the military’s understanding of the virus outbreak. Kim Byung-Chul plays Byeong Chan in the show.

Aside from the students mentioned above, other high school students fought their way out of the school. These include Lee Na-Yeon, Yang Dae-Su, Han Gyeong-Su, Yoon I-Sak, Kim Ji-Min, Oh Joon-Yeong, Jang Wu-Jin, and Kim Min-Ji, who joined On-Jo and the others in the school.

Another group comprised senior students who were forced to help each other out. These include Jang Ha-Ri, Park Mi-Jin, Jung Min-Jae, and Yoo Joon-Sung. These older students join the junior students in the latter part of the show. The two newly united teams worked together until the end of the show.

While All of Us are Dead centers around the happenings in Hyosan High School, the story also shows the incidents outside. Detective Song Jae Ik (played by Lee Kyu-Hyung) finds himself investigating Lee Byeong-chan (Kim Byung-Chul), the man behind the virus outbreak. He is soon joined by a cowardly police officer, Jeon Ho-Chul (Park Jae-Chul), a baby born amid the virus outbreak, a child named Se-bin (Ah Se-bin), and a YouTube vlogger known as Orangibberish (Lee Si-hoon).

Meanwhile, Nam So-Ju is the Hyosan Fire Station rescue team one captain. Because of his daughter On-Jo, he defied military orders. After reaching the quarantine camp, Nam So Ju breaks out to seek his daughter.

What makes the show so popular

While most projects of the zombie genre focus on the survival of its main characters, All Of Us Are Dead takes a different approach. Aside from putting the high school students in survival mode, the show delves into the drama among the students.

For example, Lee Na Yeon demands special treatment from her classmates because of her wealthy background. Her clash with Han Gyeong-Su caused a tragic event in the show. Incidents like this keep the show fresh, despite the popularity of zombie movies and shows.

All of Us are Dead also delves into people’s sacrifices to advance their interests. There are plenty of grim ethical dilemmas that delve deeper into the human psyche. The show explores the question, “what will people be willing to do knowing that the end could be near?” All of Us Are Dead also shows how critical situations can bring out the best and worst in people.

Thus, All of Us are Dead shows how not all monsters are zombies. Some inherently good people are willing to go over beyond for others. At the same time, some people would do ugly things to get what they wanted. In the end, the viewers will wonder whether survival is a blessing or a curse.

What’s next for All of Us Are Dead?

All of Us Are Dead is proof that Korean filmmakers are excellent at tragic thriller dramas. In fact, the show has already cemented its position as Netflix’s fifth most popular non-English-language series debut.

Despite being out in the world for less than a month, All of Us Are Dead has skyrocketed the fame of its characters already. The TV series has introduced the world to a string of young talent expected to take the world by storm.

Thus, there are talks about the show having a possible sequel. After all, the drastic solution implemented at the show’s end proved that just because some people managed to survive doesn’t mean the story is over. It seemed that the zombie outbreak had a considerable impact on Hyosan City and entire South Korea.

Shows like All Of Us Are Dead may have garnered much attention worldwide, but it’s also riddled with some plot holes. To understand why so many people are raving about the show, you should take the time to stream it on Netflix. All twelve episodes are available to watch on the content streaming platform.

Mega-popular shows like All of Us Are Dead help provide a welcome respite for people who want to forget about everything else for a while. If you’re looking to entertain yourself with television shows and movies, you must have a fiber home internet connection.

As one of the newest internet service providers in the Philippines, we at Streamtech Fiber Internet connect you to your favorite streaming platforms, such as Netflix. Our fast yet affordable fiber home internet plans allow families to entertain themselves to their heart’s content.

In addition to fiber home internet, we also equip our subscribers with cable television. Hence, Streamtech lets you exceed your limits when it comes to entertainment. Given everything happening in the world, it’s nice to relax and watch your favorite Korean dramas.

With Streamtech as your internet service provider, you don’t have to worry about those costs of having ultra-fast internet. You can binge-watch shows like All of Us Are Dead without fear of lagging. Connect with our team today to know more or reach us through our official Facebook page.

PrevPreviousWhat are the Online Celebrations of the National Arts Month?
NextTop 8 Poetry Apps to Express Your Powerful VersesNext