Android vs iOS – Which one is the top-tier firmware? 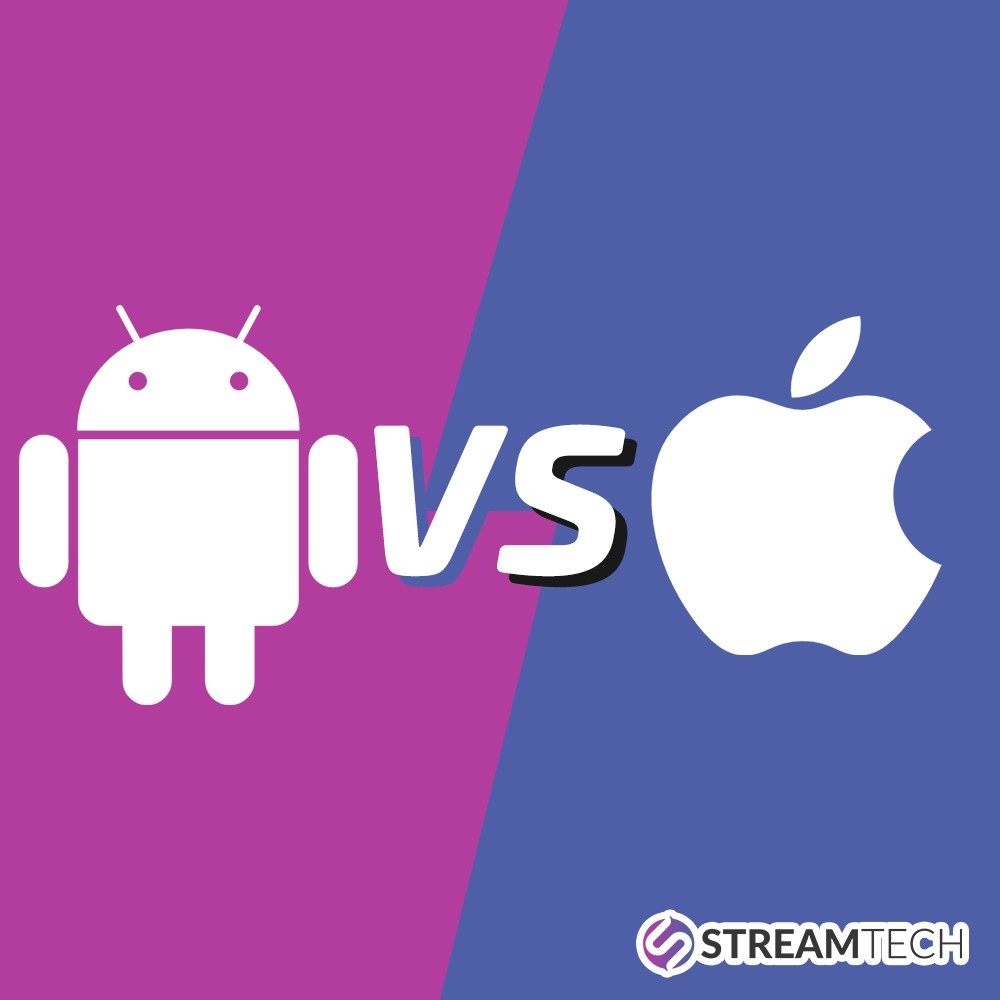 Apart from being addicted to the internet, this generation also takes a lot of time comparing almost every new technology. There is really no doubt on how two very divisive smartphone firmware have pitted most people against one another.

The entire android and ios issue plagues any tech community. And the battle between using an iPhone vs android phone is forever an argument. Addedly, it gets people scratching their heads all the time. You may feel like the topic is very subjective (which well in fact is true). But there’s definitely a lot that’s more than meets the eye in this battle between Google and Apple.

So, which one is better?

To get it immediately out of the way, one can say that both are actually good from the get-go. Just like anything, they have their own pros and cons, strengths and weaknesses.

The Android simply can’t be a perfect substitute for Apple, and vice versa. The iPhone and an Android smartphone are simply built unique and useful in their own ways. That said, only the “best” proves to be something that the user’s own subjective point of view is leaning toward.

In this heated debate between apple vs android (which is better), the best way to really go about it is to zoom in on the specs and the nitty-gritty of it all – easily seeing what outweighs what against the two famed options. So here’s a detailed side-by-side comparison of what to expect from both operating systems.

Which is easier to use, Apple or Android?

If you already have a feel of both phones, then you probably know what to expect. The clear-cut winner in this category is the iPhone, with the iOS proving to be more user-friendly. It has a UI that’s as intuitive as it is sleek and clean. The iPhone is undeniably what killed and knocked the Nokia Symbian and Windows mobile roughly a decade ago.

The thing about Android, on the other hand, is that the level of open source flexibility has kind of pushed it to be turned into several brand-specific iterations. And that is what most of the time prove to be quite flawed and janky. Despite being based on a single style and code, the expansion proved to be quite confusing. Also, it had a lack of synchronization when it comes to updates, features, and aesthetics.

But the real kicker about Android phones is their ability to mutate and be customized to the users’ liking. So it’d be preferred more by those who tinker like a coder would in using a Linux OS for the PC.

Apple is too proprietary to allow its users to go as far as to fully customize and tinker with the code of the phone. There are a lot of bricking issues popping out left and right as you try and “jailbreak” your iPhone to maximize its use.

So factually, in this department, Apple has got it easy for casual phone users who need something easy to get into, while Android’s flexibility makes it a better choice for those who tinker.

The looks and the price

There’s no arguing that there are really not many choices when it comes to getting yourself a phone with iOS 14, as it only comes from one source – Apple. Even if a certain iPhone release comes in three formats that try and target all possible demographics, its lack of compatibility proves to be quite limiting for most. This is especially true that they’re priced quite more expensive than Android devices. And even the cheaper options are still not that affordable when you compare the specs side by side to an android phone of the same tier.

In contrast, the thing about android devices is that they have a plethora of options to choose from. This is because the opensource operating system manages to tackle every demographic:

There are a lot of big-name brands that have been successfully going head to head with Apple that have Android installed in it. These include the Google Pixel, Samsung, Xiaomi, Huawei (previously), Vivo, and Oppo.

All these vary in prices drastically, with some proving to be super affordable for the specs sheet while others are jaw-droppingly disconcerting for a phone.

The level of openness the OS of IPhone and Android provide

I remember struggling to get my hands on a super useful app from the Apple app store, since it’s not available on Google Play and that I’m currently using an Android phone. It’s a hassle to work with something so proprietary as Apple when it comes to taking care of their IP and assets. It’s such a pain to get things across operating systems. That’s why Apple makes up for it with exclusives within their own assets. These include Apple Music’s spatial audio, Clubhouse, and Bumble being available only for iOS (for a time), FaceTime, Airdrop, and many more.

Android devices, on the other hand, still prove to be the more flexible choice. They come with tons of alternative applications for non-ported (yet life-changing and necessary) Apple apps. Also, they prove to be easily compatible with most apps and aren’t as constricting as using an iPhone. This makes it the perfect choice for users who aren’t looking to miss out.

Right off the bat, the clear winner here when it comes to popularity is Apple’s Siri. It’s a smart and intuitive app in the guise of a sentient AI with the voice of a lady. The thing is, Siri is more of a question and answer type of girl, much like you would the internet-famous Cleverbot. It’s an all-encompassing AI when it comes to knowledge. But it’s not that advanced when it comes to streamlining your life by literally having a PA that you can talk to inside your phone.

If that’s what you’re looking for in a smartphone, then Google Assistant is your best bet. This voice assistant AI is cleverly intertwined with your Google applications from Google Calendar, to Google Maps, and even Gmail and the Gsuite. This program is intelligent enough to automatically adjust things for you as needed. Let’s say you have a meeting but there’s unforeseen traffic outside of your home or office. Google Assistant would easily go the extra mile and fix your schedule, notify you beforehand, and make sure that you leave earlier so you arrive at the meeting on time. Now, that’s sweet!

It’s always nice to be updated

Patch updates ideally should regularly be put out to improve the overall stability, performance, and aesthetic of the operating system. It also adds extra levels of security, catching up with the ever-changing landscape of technology when it comes to manipulating it selfishly to one’s advantage.

This is where Apple has Android beat to a pulp. Apple users can attest to the fact that security on iPhones is very good. Also, there’s a constant rollout of patch updates. It’s really easy to get locked out of an Apple phone to no avail. This makes it a phone that’s not that viable to steal since it’s not that easy to break into the system.

While some may prove successful, the phone usually locks most if not all features to render it useless for the robber. This is making it the perfect phone for people who are very particular about the stuff they keep in their phones. If anything, this level of care and security is what Apple fans may argue that they pay extra for. Though, sometimes, the iOS also messes things up, with updates messing up the WiFi connection or the overall usability.

On the other hand, Android phones have their open-sourced operating system to a fault, with Google only supplying the base OS and several programs for function. But they pretty much leave the table to the phone manufacturers when it comes to making sure things are always up to date and secure.

The lack of patches and upgrades proves to be quite sketchy for Android users. This is especially true since there are barely any security patches provided on the scarce android updates. Statistically speaking, roughly 75% of android phones have outdated security.

Here’s where the biggest problem lies in Apple. Since everything is proprietary, their products barely work with other peripherals aside from the ones provided directly by Apple. iPhones tend to be picky when it comes to working with lightning cables and other connectors.-And the fact that they have to make their own in and out ports kinda throw most people off since they could’ve just used USB tech instead.

Even the wall chargers are a pain since the cables and the phone only charge with the specific voltage and amperage of Apple’s wall charger. It’s even funny how they changed the input from the typical USB-A to lightning or USB-C port. This proves Apple to be that questionable and stuck-up company that really likes raking in profit.

Android devices, on the other hand, are easy to use with any cable or supplementary peripheral. This pushes developers to keep creating and inventing stuff to make the phone better. These include intuitive gamepads and super convenient wireless chargers, to name a few. Also, android peripherals are far cheaper than ios peripherals – making it a more practical choice.

This depends vastly, but history speaks for itself when we claim that iPhones have undeniably crazy bad battery life. The worst part of it all is the fact that it’s proprietary and it’s not that easy to find a replacement battery and have the phone fixed and changed. Once Apple iPhone batteries’ health goes far down, there’s really nothing much to do but throw away the phone and buy a new one, since replacing it via the Genius bar would prove to be just as costly as a new iPhone. Since cloud integration is seamless and that it’s easy to swap between Apple devices, buying a new one is far less tedious and time-consuming.

Android phones,on the other hand, barely have any battery problems. You rarely need to make sure they’re fully charged, as heavy use would still have you charging nightly and waking up with a fully juiced phone ready to take on the day.

The Internet that goes well with any of the two

But what good is a powerful smartphone if you can’t connect it to a proper internet source? It’s wise to think that you should never let your phone be paralyzed by stuttering and lagging internet connection. The key here is to subscribe to an ISP that won’t let you down when it comes to providing quality service and at unbeatable speeds and plans.

That’s what you can expect when you subscribe to Streamtech. They have highly competitive plans and promos that are waiting for you to avail of them. This is not to mention the fact that it would totally change your phone using ways for the better!

For more details, you may also visit the Official Facebook Page of Streamtech.