See the Best of Blacklist International: How They Won the MPL Season 8 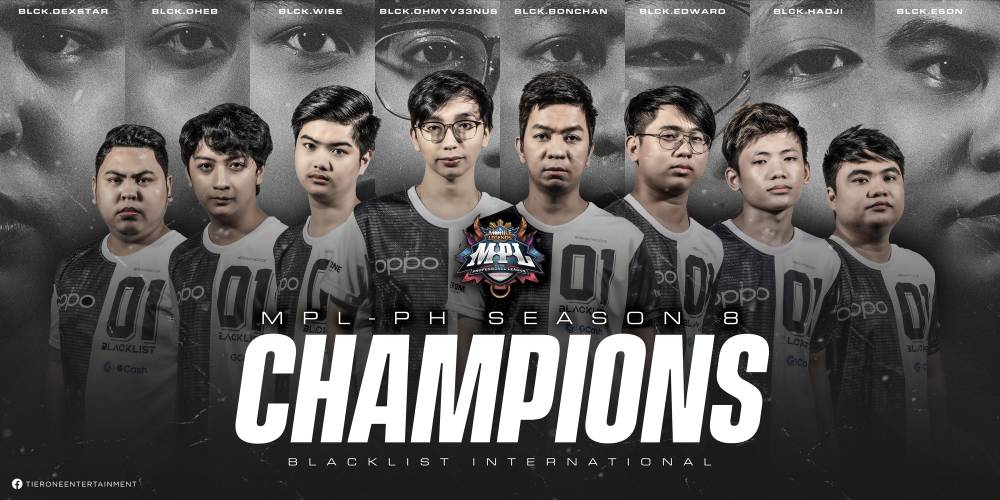 It’s not just back-to-back! It’s BLACK-to-BLACK for the MPL Season 8 Champions, the Blacklist International team. Just like what the whole mobile legends community says, the team dictated the tempo of this season with a sweeping 13-1 standing. And indeed, as champions of the previous season, they retained the crown against Onic PH during the grand finals.

Just like a super-fast internet connection, the manner by which they represented the country in the M3 World Championships was equally seamless.

The MPL Season 8 Grand Finals meant a lot to the team.

As we all know, Blacklist International is the champion of Mobile Legends Bang Bang Professional League Philippines (MPL) Season 7. It has a close fight with another zealous team, Execration (Exe). During the best of seven (7) grand finals of season 7, Blacklist International rose up as the better team, with a score of 4-3 against Exe. The team brought home the huge cash amount of $ 120,000. This is aside from the bragging rights of being able to own the whole mobile legends PH for the said season.

However, after such a crystal clear victory, the team found it hard to gain respect from some critics after landing the 1st runner-up during the MSC 2021 held last June 7-13, 2021. They went against their same opponent during the MPL Season 7, Execration, who bagged the trophy after the grand finals. That’s why it is really valuable to everyone in the team to have one this 2nd championship during the season 8 MPL.

We have the skills and talent, and we’ve earned the crown through hard work.

According to the team’s captain, Johnmar “Ohmyv33nus” Villaluna, rising up among the eight teams competing for the crown is their way of proving that last season’s victory is not out of sheer luck. Their win against Onic PH, another top-notch team this regular season, is out of pure skills, talent, and hard work from everyone in the team.

It’s a way of making up for my mistakes.

On the other hand, according to the team’s gold-laner, Kiel “Oheb” Soriano, during this championship, he gave it his all as a way of making up for his mistake earlier this season 8. It can be remembered that Oheb was banned and fined after their sweep of 2-0 against Smart Omega Esports last October 9, 2021. Blacklist International then missed him playing during their match against Bren Esports.

Also, according to Oheb, this eagerness stems from that moment up to the team winning the playoffs, the lower bracket finals against Smart Omega on October 24, 2021.

Dreams do come true, and this is it.

Aside from Soriano, Salic “Hadjizy” Imam is another wonderful story told. His reunion with previous co-members Dexter “Dex Star” Alaba and Kristoffer “Bon Chan” Ricapalza has been a huge welcome to Blacklist International earlier this year.

Hadji has had an untiring effort to win an MPL Championship since Season 2. And this has been one of the promises of Blacklist International, that they will surely win this MPL PH Season 8 for Hadji to win his first MPL title.

What’s more to this is that this “KDA machine” even bagged the Most Valuable Player (MVP) title for the grand finals. Aside from the prize pool, this is such the final day of season 8 when his dreams do come true.

Together, we are strong!

The team’s jungler, Danerie “Wise” Rosario, was in tears after their flawless win during the grand finals. When asked why, he said that he is so happy after such a victory. According to him, it’s their way of saying that team “v33wise” is always strong together. This dynamic duo is living proof that hard work is the key to success.

In addition, he is so happy for their new teammate, Hadji, for finally getting his first MPL title. Wise said that Hadji has been a very kind and hardworking player since Season 2, but unfortunately, his team always fell short during the finals. And that is why Blacklist International is more than eager to bring home the crown.

We are solid as a family.

The coach of Blacklist International, Bon Chan got teary-eyed after this back-to-back win streak of the team this MPL PH Season 8. According to him, beyond competing for the Mobile Legends Professional League Philippines, Blacklist International is solid as family. He could not find the right words to say to describe their bond.

This is perhaps the reason why the team has successfully executed their enhanced “UBE strategy.” This stands for Ultimate Bonding Experience wherein during clashes, they will stick together and protect each other. The executions of needed support at the right time and place are phenomenal, leading to the crown.

Each of the eight teams that competed in the currently concluded MPL PH Season 8 has its own strengths and weaknesses. However, Blacklist International’s UBE code plus each of the player’s individual strengths is proven to be unbreakable.

Onic’s disruption was successful only in the first instance.

It can be remembered that during the 6th week of the season, Onic PH successfully broke Blacklist International’s code. The former finally cracked the 10 win streak of the current champion. And this is through their successful disruption of Blakclist’s formations during team fights, through the on-point skills of Beemo’s Akai. Thus, this secured them a spot on the upper bracket.

However, none of these strategies worked anymore during the grand finals as Blacklist International’s players seemingly divulge their own individual prowess. Even the side lanes are getting their own successful kills. Simultaneously, the roaming supports became more and more aggressive. Onic could have also watched their “recalls” more.

That is why they ended this season as the first runner-up.

John Michael “Zico” Dizon and Neil “Midnight” De Guzman are the coaches of Nexplay Evos, our second runner-up this 8th season. They were successful in changing the plays of the team, recovering from their early defeats. However, this still did not work with the champs as they had a sweep during the lower bracket match with NXPE, scoring 3-0.

With the whole league’s shift to a franchise model, announced just last July 2021, there had been rebranding and reshuffling of players. But such a launch led to eight teams who competed for this MPL PH Season 8. Below is the list with their corresponding final standing (matches won-lost) after season 8’s end.

What is the future of the Champions?

Apart from winning a back-to-back title during this Mobile Legends Bang Bang Professional League Philippines Season 8, the top two teams are set to represent the country to the M3 World Championships this coming December 2021.

What does this mean? Aside from being able to defend the Philippines’ title after Bren Esport’s victory during M2, the winning team will be able to bag $ 800,000. Can you just imagine that the biggest MLBB tournament just got bigger?

That’s why to all those aspiring gamers who wanted to be part of the professional league, do everything that will take you up on the pedestal.

Gamers, take your experience to the next level with Streamtech!

The advent of technology made things like this possible. Aside from these huge perks of being a pro player, the game itself is one of the most popular mobile games in the country. And what’s necessary for one to be able to play this is a high-tech smartphone and a reliable and fast internet.

The great news is that another internet service provider in the Philippines is here to provide for such needs. Streamtech, the Philippines’ newest wave in fiber internet, offers stable and fast internet suitable for your needs. These include not only gaming but even other necessary online activities such as working, learning, banking, shopping, and many more.

And as the internet service provider you can trust in the Philippines, it has affordable home fiber plans. For as low as PHP 1,499, you can already get a fast internet connection of up to 25 Mbps. Additionally, you can avail of its Extendifi Wifi extender so that you can expand your connection everywhere in your house.

PrevPreviousWho are the professional mobile legends players in the Philippines?
NextLearn the Easy and Immediate Fixes to the Recent Roblox CrashNext